There is a nifty application that we keep on our phone, and look at only occasionally, called Marine Traffic.

Most ships at sea use GPS not only to keep themselves on course, but to let others know where they are. Marine Traffic picks up those signals and maps the positions of the reporting ships. You can touch a ship's icon, and the program will tell you the ship's name, its speed, whether it's a tanker, a cargo ship, or whatever, where it started from, and where it's going.Very cool.

The other day we took a look at what's going on in the Atlantic Ocean, and saw this:

This is actually a "summary" picture. There are far more ships than this, as you discover when you zoom in to the picture. But even so, we found one thing to be rather startling:

Those purple ships? Those are yachts.

Now take a look at the Indian Ocean:

The red ships are tankers. The ones that appear to be black are fishing vessels. Cargo vessels are green.

Just thought that was interesting.

There's nothing we can add to the unending commentary of the talking heads about the mid-term elections. But we did want to share this postcard, found lying in an alley beside a recycling bin: 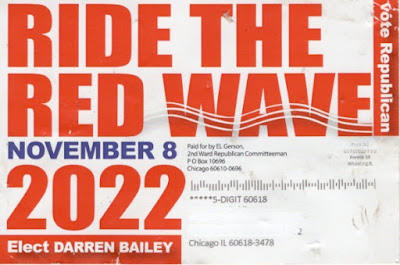 Okay, I will add one observation. A billionaire named Dick Uihlein set fire to $50 million in an effort to get this alleged Christian, Darren Bailey, elected. 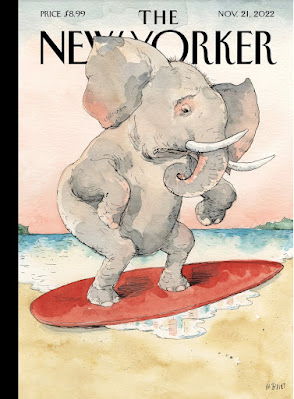 Where Could This War Go?

For those with the time, this discussion of the outlook for the war in Ukraine is very informative. The first 50 seconds or so is just an outtake from later in the discussion; i.e., it repeats itself. The whole thing is about 18 minutes.

Where else have Iranian drones been used by one side, and Turkish drones by the other?  It could be significant down the road.

What NATO country is most likely to wimp out this winter? His guess is the same as ours.

Posted by Bob Miller at Wednesday, November 02, 2022 No comments:

A week ago we heard retired U.S. General Ben Hodges predict that Ukraine would take back Crimea next year.  Wow! That's great news.

It is not an opinion held by all. In this video, former MI6 chief Alex Younger is not so optimistic. The entire interview is interesting and informative, but his opinion about the course of the war begins at about 8:50.

Could you use a pick-me-up video? Give this one a try.

A small organization called Ocean Conservation Namibia is in the seal rescue business, if you can call it a business. On the coast of that southwest African nation, seals by the hundreds become entangled with fishing lines, fishing nets, gill nets, Coca-Cola cans, hard hat head bands – whatever is thrown in the ocean – in astounding numbers. In time, the entangled lines cut into the animals' necks, causing horrible wounds. These guys patrol the beaches and the docks looking for seals in such danger, capturing them, removing the entanglement, and setting them free.

What a great job!

Posted by Bob Miller at Wednesday, October 26, 2022 No comments:

"Both fascism and communism were responses to globalization: to the real and perceived inequalities it created, and the apparent helplessness of the democracies in addressing them. Fascists rejected reason in the name of will, denying objective truth in favor of a glorious myth articulated by leaders who claimed to give voice to the people. They put a face on globalization, arguing that its complex challenges were the result of a conspiracy against the nation.
Americans today are no wiser than the Europeans who saw democracy yield to fascism, Naziism, or communism in the twentiety century. Our one advantage is that we might learn from their experience. Now is a good time to do so.